The following FOIA websites are local and federal government response to this law. They are a way to make government more transparent and truly for the people.

If you’re a history researcher or just someone interested in public institutions’ actions, freedom of information sites give you access to an enormous library of information. You can uncover amazing stories and data from declassified documents or unredacted files.

Even if documents already released to these sites don’t cover what you’re looking for, there’s also typically contact information and instructions on filing your own Freedom of Information Act (FOIA) request.

President Lyndon B. Johnson signed the Freedom of Information Act into law in 1966. The following FOIA websites are local and federal government responses to this law. They are a way to make government more transparent and truly for the people.

The FBI has been a part of the United States government as far back as 1908. This was when Attorney General Charles J. Bonaparte created a small group of special agents as part of the Department of Justice. This small investigative group is what would eventually become known as the Federal Bureau of Investigation.

The FBI Vault is where you can search any keywords for topics from the FBI’s history you may be interested in. 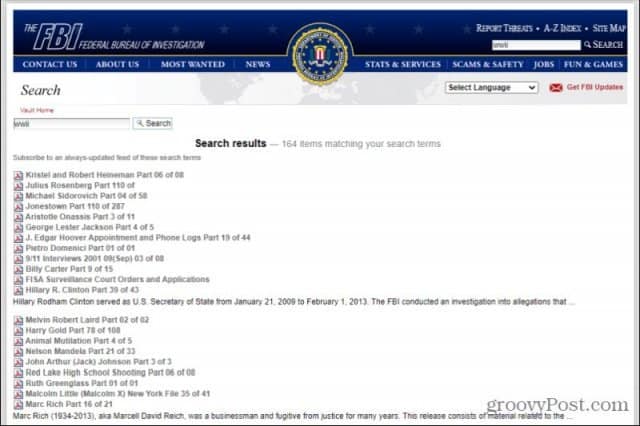 The documents you’ll find in this vault include detailed investigative notes, memos, and other documentation produced during the course of various investigations.

Keep in mind that many documents will contain large amounts of redacted information. This is typically information that is still sensitive or relates to people who are still living. 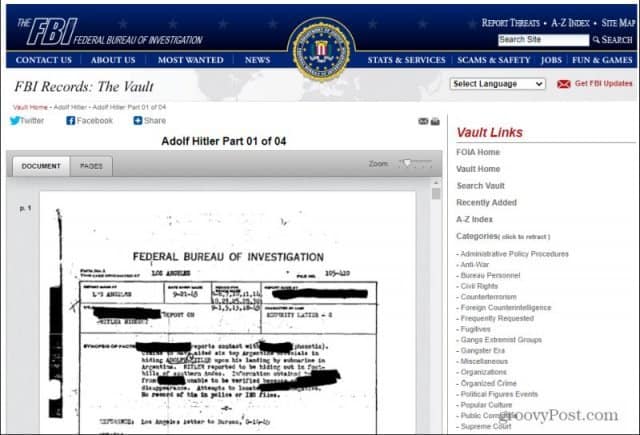 However, there are just as many documents that don’t have much that’s redacted. The amount of history you can extract from the FBI Vault is impressive. The documents typically cover domestic activities where the FBI was involved. Think Civil Rights, suspected Communists, and the mob.

The CIA Reading Room is, like the FBI Vault, a search engine where you can search for historic CIA case documents from throughout the history of the agency.

Before the CIA, there was the Office of Strategic Services (OSS) during World War II. After the war, Harry S. Truman signed the National Security Act in 1947. This, in large part, led to the formation of the Central Intelligence Agency (CIA).

With such a long history, you might imagine the intriguing declassified documents you can uncover when you search the CIA Reading Room.

Keep in mind that many CIA analysts compiling internal documents captured news clippings from already publicly available sources. Many of these FOIA-released documents are not very interesting.

However, there are plenty of internal memos and other declassified documents that are truly fascinating. 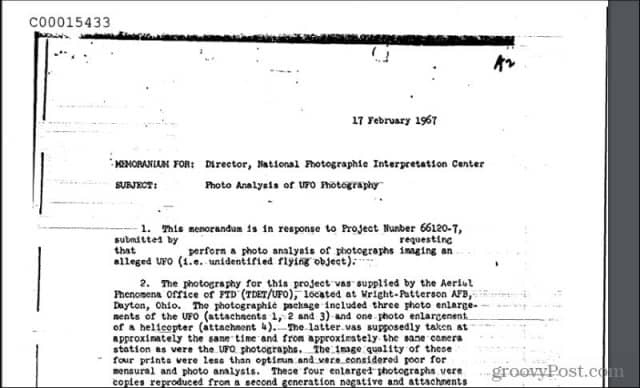 Take some time to type in some search topics in The CIA Reading Room. The website is frequently updated and highlights some of the most intriguing and interesting documents recently released.

While there are many individuals and groups in the world who spend time filing FOIA requests and sharing the documents with the world, there are few as active as the National Security Archive. It was founded in 1985 at George Washington University as a non-profit, government watchdog group.

The website is frequently updated with the latest FOIA collections that the group has uncovered. These are not just document dumps but often full articles detailing the highlights of what those documents reveal. 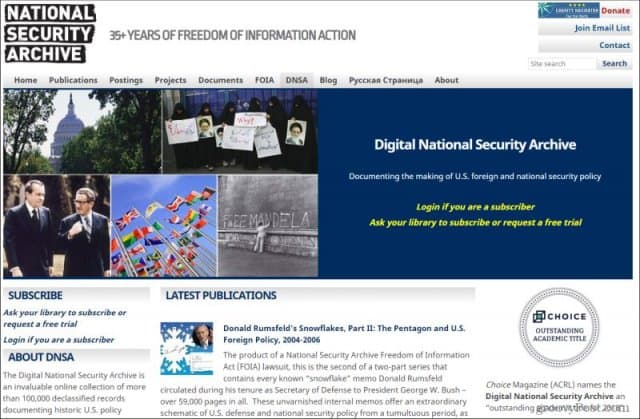 If you scroll down to the bottom of the site, you’ll see links to additional collections organized by large categories like Cold War, Human Rights, and regions of the world.

Use the Virtual Reading room to do more detailed searches for specific topics or time periods that you’re more interested in.

4. Office of the Director of National Intelligence

Why visit every government website to try and find more declassified documents when you can find all of the latest ones in one place? This is what you’ll find on the Office of the Director of National Security (ODNI) website. 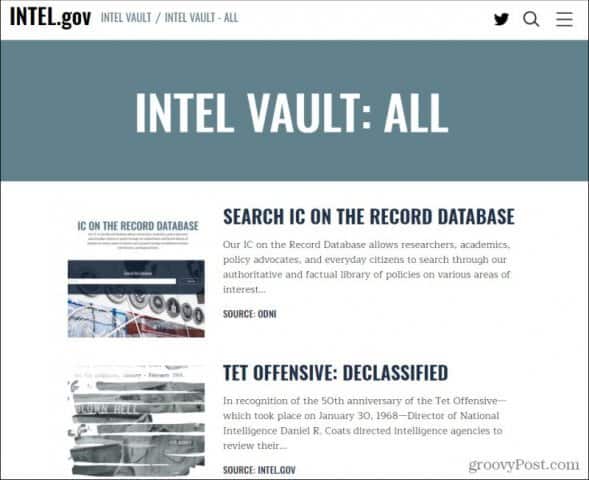 This makes sense since the ODNI is the over-arching office responsible for all of the nation’s intelligence. As you scroll down the “Intel Vault” at Intel.gov, you’ll notice news on the most recently declassified documents, with the agency source listed underneath.

If you’re more interested in staying on top of the most recently released documents rather than searching archives, this page is the one to bookmark. 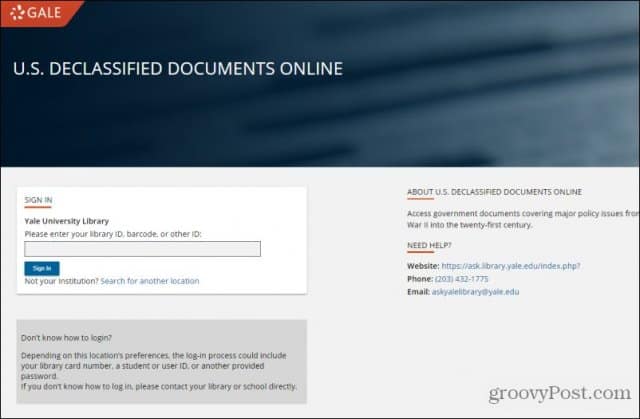 Princeton and Rutgers also have searchable online databases as well. To use any University library archive like these, you will need a valid school ID. In some cases, you may also need to request access to the archives.

If you do have access, these archives will save you a great deal of time. You won’t have to worry about hunting through the various agencies that you want records from. Instead, you can search one database and access all declassified documents.

The Wilson Center, on the other hand, has retrieved documents from government agencies all around the world. The main page highlights stories from its featured collections and recently added documents. 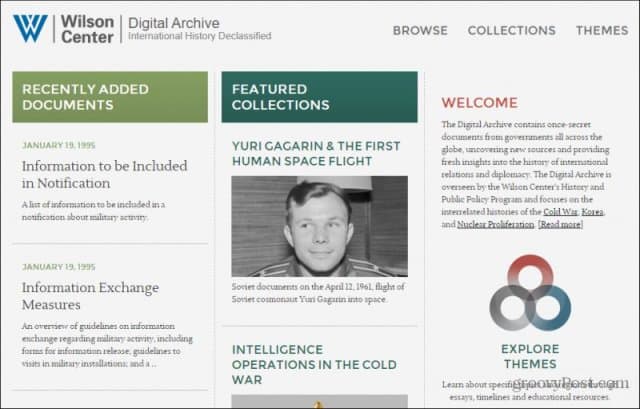 If you select the Browse link at the top of the main page, you’ll see a web page with a map of the world. This map lets you select what region of the world you’re interested in seeing declassified documents from. 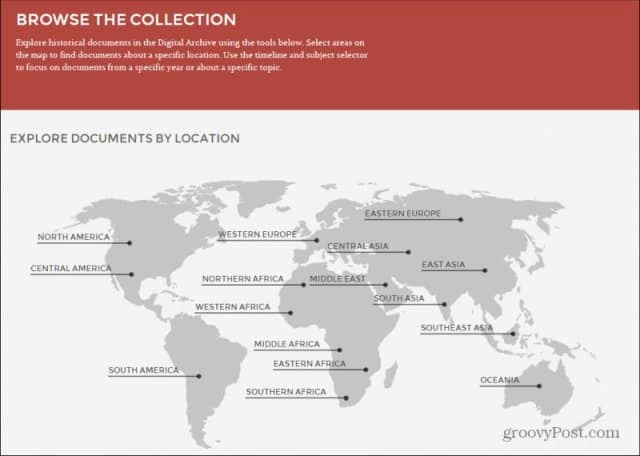 Then you can select to view sub-regions or See all documents to see the list. The Wilson Center is a must-have bookmark if you’re at all interested in fascinating historical documents and stories from around the world.

You don’t have to have a degree or special certification to be a researcher with access to declassified documents from around the world. All you need is an interest in history and access to the internet. Use any of the sites above to start diving into what used to be classified information and state secrets. You’ll be amazed at the stories you’ll come across.