This week’s free app is artistic pinball game INKS. Normally it’s $3, but you can get it free from iTunes until Thursday, September 21st.

This week’s free app is the artistic pinball game INKS. Normally it’s $3, but you can get it free from iTunes until Thursday, September 21st.  Remember, starting this week, you’ll need to explore apps on your mobile device rather than through iTunes on the desktop.

It’s a cross between your standard pinball simulator and a drawing program.  Instead of getting points, your goal here is to hit bumpers and walls loaded with ink. The ball trails the color of the ink you last hit.

You move onto the next level when you’ve released all the ink and made a masterpiece of the game field.  As the game progress, you get more opportunities to paint.  After finishing a level, the app lets you share your creation.

Like many minimalist games, there are no scores or lives.  The ball goes out of play when it hits the drain, but the game is mostly about a fun way to paint.  Some in-app purchases give you some special effects and credits.

This is one of those games that could appeal to anyone who can use a touchscreen.  Kids can just press the flippers to draw, while adults can use them for focus and relaxation.  I tried playing it on my AppleTV through Airplay, and it was gorgeous on our big screen. 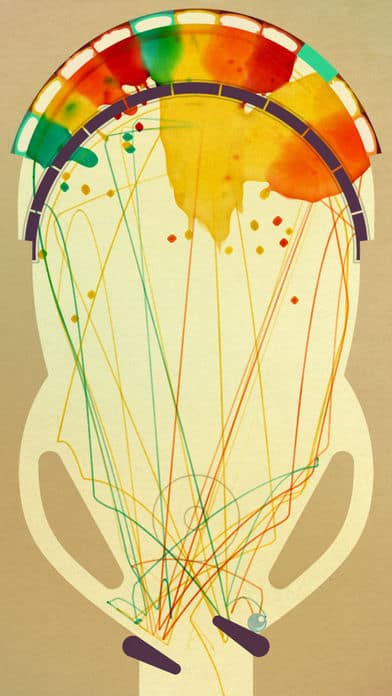 Pinball wizards like myself might miss the ability to use Body English to coax the ball into the right position, but sadly it doesn’t support that.

This app was an Apple Design Award winner for 2016 and Best of App Store for 2016, so that makes it an obvious choice for the free app of the week.  It shows how you can take a common game like pinball and add some flair and an uncommon goal.

The app takes up about 370MB, that’s a bit big, but not a space hog.  You’ll need an iPhone 5 or higher to play the game. I’m keeping this on my phone for a quick game or entertaining the kids borrowing my phone.  If you have an AppleTV, try my tip for enabling AirPlay.