This week’s free app is Colossatron: Massive World Threat. Normally priced at $0.99, this app is free until Thursday, August 31.

This week’s free app is the color matching game Colossatron: Massive World Threat. Normally it’s $0.99, but you can get it free from iTunes until Thursday, August 31st.

Think Candy Crush meets Godzilla. Instead of the hero saving the world, in this game you’re an alien weapon.  You match color segments of the weapon.  The more you match, the more you get to destroy of the planet.  Each level gives you a fake news report to move the story along. The game is by the same people who did Fruit Ninja.  Players love matching games.  It’s about skill and pattern recognition.  They include a ton of various in-app purchases to cause more destruction and mayhem ranging from 99 cents all the way up to $39.99.  Make sure you’ve enabled parental controls to prevent unwanted purchases by the kids.

Adults will see the game as cute and kitschy. I’d assume the target market here is kids.  However given the destructive nature and dark tone of the game, I’m not sure I’d let my kids play it.  Some parents might find the stereotypes of the military and the media in this game inconsistent with their values.   Apple rates the game as 12+ due to simulated cartoon violence. 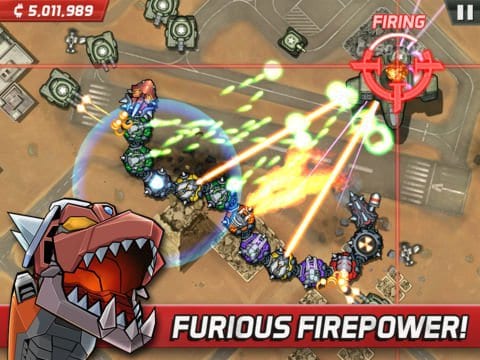 I’m hard pressed to find a reason here.  The game is quite a bit older; based on the reviews it’s from 2013. As some reviews pointed out, this game has been free in the past and has not been significantly updated since 2015, making it an odd choice for Apple to feature. The game stands out by making the player a villain instead of a hero.  The animation sequences in the game immerse the player into a mini-movie.  Instead of just a three-matching pattern game, the developers thought it should have a purpose.  In this case, it’s all about seeing how much damage you can cause. Apple could have timed their pick a bit better.

The app takes up about 80 MB and only requires iOS 7.0. That makes it a good game for older devices. I deleted this one right away. Destruction of the world and wanton violence (even animated) of our planet and innocent people didn’t sit well with me.