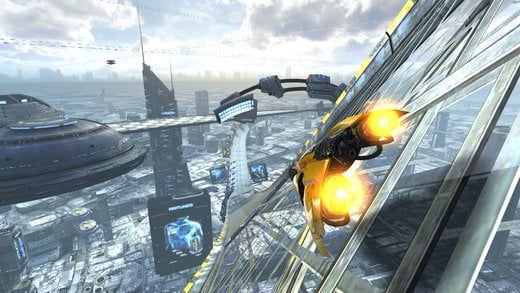 This week, the Apple App Store editors have chosen racing game AG Drive as its free App of the Week. Usually $4, you can download it for free until Thursday, September 29th.

AG stands for anti-gravity. The game is all about racing without roads. You’ll race your ship against aliens on different worlds. The gameplay lets you use the accelerator or screen controls. The techno music and gorgeous graphics make it fun just to explore. With this free app, you get not just an iPad and iPhone game, but it works on the AppleTV as well. Playing it on the TV was awesome, even though I don’t have a game controller. I had the most control of my ship on the iPad, moving the entire device helped me steer easier. The integration with Game Center lets you coordinate play.

Gamers with a steady hand. The starting ship isn’t that great. The ship was hard to control as a novice. The game gives you the option to upgrade the ship to something better, but I’d have to pay for the upgrade as an in-app purchase. To be honest, this drives me a bit crazy. Either it’s a free game, or it’s not.

After the excellent tutorial, you can try an extended race or just a 30-60 second sprint. I never qualified for any higher levels, and I didn’t buy any upgrades. That said, by the end of my review I was having fun with it. A pleasant diversion to improve my hand-eye coordination.

On my iPhone 5s running iOS 9, the game played fine despite the intense graphics. It’s a shame, though, to play it on the iPhone because it deserves a big screen. Playing it on the iPad or the Apple TV was much more fun.

The game takes a whopping 541 Meg: not suitable for devices running low on space. I removed it from my iPhone, but I’m keeping it on the AppleTV and iPad. I’ll enjoy showing off my TV and stereo system to guests with the AppleTV version.