Today only, Amazon is offering $8.63 off any purchase of $50 or more. Let’s review the details and how you can cash in on the offer.

Today  Amazon is running a one-day promotion in celebration of the annual corporation-reputation Harris Poll, a survey which interviews

thousands of employees from 100 large companies in an effort to rank said businesses in favorability. For the second year in-a-row Amazon scored first place in the poll results, this year winning with a rating of 86.27.

The score brings them in just under a full point above Wegmans grocery stores which is also famous for placing high on the list each year. The deal being offered is $8.627 off your purchase of $50 or more. The discount being derived from the rating of 86.27 — and to mathlete’s joy, it does round up in the shopping cart.

To redeem your $8.63 discount just add $50 worth of items sold directly by Amazon to your cart and then during checkout punch in the promo code “BIGTHANKS” just before confirming the order. The order should immediately reflect the -$8.63 difference. 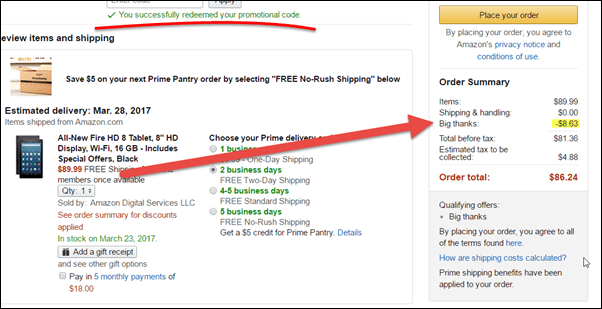 But take this list of most favorable companies with a grain of salt. Other company review sites such as GlassDoor.com have very different results based on publicly available user submitted data. Whereas it does not appear the Harris Poll has the same transparency.